Farmer recently traveled to New Orleans for a meeting to figure out how a deal can be struck that does not interfere with the Sun Belt Conference’s existing TV contract with ESPN.

“Still plugging away at it,” said Farmer, who was in Montgomery, Alabama, early this week for the Sun Belt’s annual spring meetings.

Farmer initially hoped to have a deal done during the 2014-15 school year, whose sports schedule soon concludes.

A hang-up, however, continues to prevent it from materializing.

“It all comes back to those outlying areas CST has that conflict with the current ESPN contract that the conference has,” Farmer said. “The contract states that, basically, we can create our own stations and we can put it in any state the Sun Belt has a school in, or in any state that touches that state.”

According to Farmer CST has reach into a small number of outlying areas that would be in conflict with the ESPN contract — for instance, some homes in the San Diego area of California.

The farthest-west state with a Sun Belt school is Idaho (football-only member Idaho).

In 2014 the Sun Belt announced an expanded agreement with ESPN that resulted in every home football game for all SBC members last season being carried on either ESPN, ESPN2, ESPNU, ESPNEWS or — as was the case for the majority — ESPN3, an online outlet.

The expanded deal was added to an existing multi-agreement between ESPN and the Sun Belt that runs through the 2019-20 school year.

Other Sun Belt-related programming was picked up by various ESPN networks as well in the 2014-15 school year, including men’s and women’s games from the 2015 SBC basketball tournaments in New Orleans.

ESPN3 also is airing the Sun Belt Tournament baseball title game from Troy, where UL opens play Wednesday as the No. 3 seed against sixth-seeded Texas State.

ESPN and its networks have first choice of what will be televised from the Sun Belt, and ESPN3 (digital online programming) essentially has next dibs.

For UL, that meant no 2014 Cajun football games were aired by the Ragin’ Cajun TV Network.

Moreover, ESPN-network and even ESPN3-produced programming is exclusive to the networks — and isn’t made available to other networks like, for example, CST.

Part of the Sun Belt’s deal with ESPN, however, does permit individual schools and affiliated networks to produce and broadcast their own content — with ESPN, including ESPN3, essentially having right of first refusal for football games, and with the caveat that anything the schools and their network partners produce must be offered up to ESPN3.

The schools and any contractually tied network can do their own production and programming of events not claimed first by ESPN, in other words, but they must pay for it and provide it free-of-cost to ESPN3.

That prompted discussion, starting sometime in 2014, between UL and New Orleans area-based CST.

With not all 2014 Cajun home football games broadcast via traditional cable or satellite TV because of the Sun Belt agreement with ESPN involving ESPN3, Farmer wants wider TV exposure for a program that enjoyed four straight 9-4 seasons and four straight New Orleans Bowl victories from 2011-14.

Local TV station KLAF, meanwhile, is currently a MyNetwork affiliate but plans to become an NBC affiliate in July.

KLAF has televised UL baseball games for each of the last 15 seasons, including eight games this year along with eight UL softball games.

KLAF’s Mike Mitchell said via email that after the switch to NBC the MyNetwork that was on KLAF “will continue … on another channel.”

Mitchell said Friday night high school football games will air for a 31st year on the MyNetwork channel in 2015, and that “we hope to air” the usual 16-game UL baseball/softball package also carried on ESPN3, but that the latter “needs to be worked out later” with Farmer.

For now, though, Farmer’s focus is on the CST talks.

Asked if he still thinks a deal is possible in time for the 2015-16 school year, the UL athletic director was optimistic. 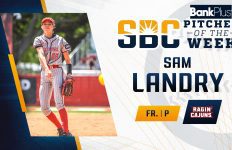