Louisiana cornerback/return specialist Eric Garror received his first weekly honors of the 2022 season he was named the Sun Belt Special Teams Player of the Week, announced by the league office on Monday.

During Louisiana’s 24-7 win over Southeastern Louisiana Saturday night, Garror returned a punt 83 yards for a touchdown in the second quarter to increase the Cajuns lead to 17-0.

The punt return for a touchdown was Garror’s second in a Cajun uniform, with the first coming against Iowa State in the 2020 season opener. Garror also had two tackles and nabbed his eighth interception at Louisiana.

Louisiana (1-0) will return to Cajun Field on September 10 to host Eastern Michigan (1-0) in a 6:00 p.m. kickoff. The game is being televised nationally on NFL Network 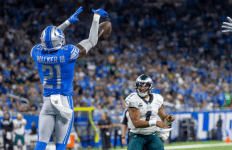