The UL Ragin’ Cajuns Baseball team officially released their 2022 schedule on Thursday. 16 of their games will be against teams who competed in the 2021 NCAA postseason. A couple of highlighted series are UC Irvine and Southern Miss at M.L. “Tigue” Moore Field at Russo Park.

The Cajuns finished 32-23 and claimed the Sun Belt Conference West Division title under head coach Matt Deggs. The season opener will be against UC Irvine from February 18th through the 20th. Non-conference series that will be hosted are versus Southern Miss from March 4th through the 6th and Houston from March 11th through the 13th.

After the UC Irvine and Southeasten series, the Cajuns will make their first trip of the season to the Round Rock Classic, opening with 2021 College World Series participant Stanford on February 25th. UL will wrap up the weekend in Texas with games against Indiana on February 26th and Arkansas on February 27th.

The non-conference schedule will see home-and-home midweek contests against SLU, Northwestern State, McNeese, and Nicholls while also making a pair of trips to Louisiana Tech, first on March 8 with a follow-up trip on April 5.

The Cajuns will travel up to the Crescent City to face New Orleans on March 9, and will travel to Baton Rouge to face LSU in the Wally Pontiff Classic on April 19. After, will play a two-game midweek slate at Rice on May 10th and 11th.

The Sun Belt Conference Tournament returns to Montgomery, Alabama, at Riverwalk Stadium on May 24th through the 29th with the winner receiving the league’s automatic berth to the NCAA Regionals. 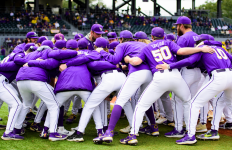 Louisiana To Play Five Contests in Primetime in 2022→